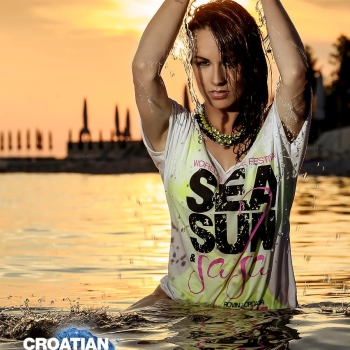 Vanessa was Born in the south of ITALY March 16, 1990, she began at the age of 10 in the world of ballet, and contemporary then she became interested in Caribbean dances at the age of 14 years winning several regional titles, national and international, she also won twice the Italian dance championship

At the age 15, she began training in afro cuban dance with Master ALBERTO VALDES.

She began teaching at the age of 17 .

At the age of 19 , she began to work with various dance companies such as:

“U-TRIBE” from France ,Erell Niane and Mike Faya with Puertorican and cuban style.

In September 2010 she moved to Milan to study and further her dance educations.

2011 - Participation in the movie "STREET DANCE 2" IN 3D (VERTIGO FILMS), to the cinema in March 2012, latin CHOREOGRAPHER Maykel FONTS.

Works as a dancer in an official Cuban orchestra founded by Virginia Quesada and Eduardo Cespedes (founders of the CUBAN orchestra in 1995 “BAMBOLEO”) and works for a national network for a Latin program television .

in September 2011 entering and working in the "FONTS COMPANY" COMPANY OFFICIAL OF THE GREAT TEACHER AND CHOREOGRAPHER MAYKEL FONTS, where she later becomes dancer of Maykel Fonts.

She dances with Maykel F. until March 2014 and In the summer of 2014 began a new experience “in the world On2” with the great master EDDIE TORRES dancer and choreographer famous in the world.