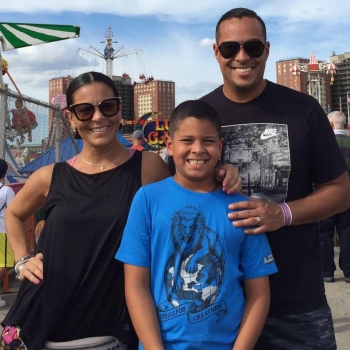 After completing a Bachelor of Science degree in Natural Sciences at the University of Puerto Rico and studying music, singing, bass and clarinet, Tito began his career as a salsa dancer on the initiative of his parents, both musicians. He also developed as a dancer of other genres such as Jazz, Merengue, "Bomba y Plena", Rumba, Modern Dance and Tap among others.

Since then he has visited more than 100 cities around the world offering classes and shows, together with his wife and dance partner Tamara Livolsi, with whom he participates in salsa congresses around the world year after year. They are jurors of the Salsa Open and the World Salsa Championship. They produce the Puerto Rico Hustle and Salsa Festival and are part of the Puerto Rico Salsa Congress organization.

On the other hand, Tamara Livolsi, born in Argentina on February 24, 1978, but raised in Puerto Rico, inherited the art of dancing from her mother. With more than 20 years of experience, trained and prepared in various dance disciplines such as jazz, ballet, hip hop and others, makes her one of the most versatile dancers and teachers. He has worked for artists such as Luis Fonsi, David Bisbal, Manny Manuel, Ednita Nazario, Grupo Mania, Yuri and Wilkins among others.

Both have filmed several television commercials and films such as Dirty Dancin: Havana Nights, Yellow, The Singer: Hector Lavoe and American Ganter, as dancers. They also own the Rhythms dance academy, along with choreographer Danny Lugo.

Today, Tito is not only a salsa dancer, but he is also the Director of the Salsa program of the Municipality of San Juan and has been in charge of the choreographic work for artists such as: Gilberto Santa Rosa, Víctor Manuelle, El Gran Combo, Michael Stuart, Tito Nieves, Rubén Blades, Richie Rey and Bobby Cruz, Domingo Quiñones, Ismael Miranda, Elvis Crespo, Cheo Feliciano, Modesto Cepeda, Andy Montañez, NG2, Luis "Perico" Ortiz, Tommy Olivencia, Julio Voltio and Tego Calderón. It is also worth mentioning that he was the choreographer of the "Bomba" and "Cha-Cha-Cha-Cha" parts of Ricky Martin's presentation of Miss Universe 2001 and Celia Cruz's "Azucar" Special in Miami in 2003. In addition, he has excelled as a jazz dancer for singers such as: Melina León, Yaire, Elvis Crespo, Olga Tañón and others.

These are the next events where Tito Ortos will participate soon