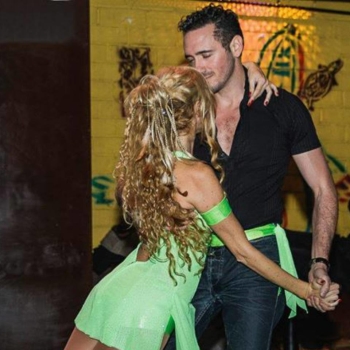 At the age of 15, Jéremy, motivated by his friends of Creol origin, began to practice dance as a couple, with Zouk and Merengue, a very close Caribbean dance with a marked hip movement.

Two years later, he began to frequent the so-called "Portuguese dances" and the Fado which means "Destiny" (in Latin "Fortus"). These dances will have a great influence on your choice of Latin dances.

He quickly became interested in all kinds of Latin music until in 1999 the film "SALSA" opened the door to the world of salsa.

Between 2000 and 2002 he took salsa lessons with the best teachers in the Paris region, becoming a real obsession.

From 2004 onwards, he carried out advanced classes in "Salsa Cubana" and "Rueda del Casino" together with the masters "David Fagor" and "Alex - Salserito", intensively for 2 hours a day and several congresses a month during the weekends.

In 2005 he began his career as a dancer and choreographer with the company "ManiaSalsa", starting in parallel to give classes in different Parisian schools, nightclubs and other events until he discovered his passion for the teaching of this dance and the happiness it provided to his students, finally deciding to devote himself completely to his classes without forgetting some performances in congresses.

In 2007 with the participation of Monica Ferret, Jeremy set up the GustaSalsa Academy where he stayed until. From then on, he started his own academy, Danza Pasion.

Nowadays salsa is more than a dance for Jeremy, it's a "way of living", a "joy of living".