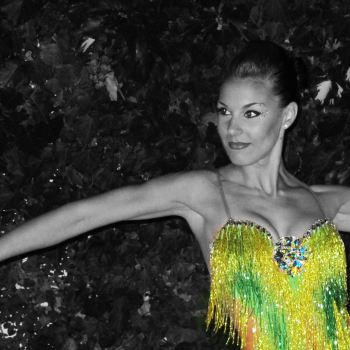 She began her studies of Dance at the age of seven, entering in 1996 to the National School of Dance of Buenos Aires, Argentina, where she trained in Classical and Contemporary Dance. In 2003 he began to take a degree in Choreographic Composition in Musical Comedy at the Instituto Universitario Nacional de Artes, at the same time he attended different classes of Latin Rhythms, Argentine Tango and Ballroom Dances in the city of Buenos Aires with distinguished teachers. Since 2009 she has been living in Catalonia, where she continues her training as a competitive sports dancer.

He has participated in different events:

Champion of Spain in combined dances (Waltz, Tango, Pasodoble), in the European Championship of Dance in Torremolinos.

Spanish Champion of Argentine Tango, in the "Homenaje a José Rajel" in Sitges.

Classes in Ballroom Dance and Salsa at the Musical Comedy Schools:

"CEA" and "HANNA" from Buenos Aires.

Stable dancer of the Brazilian group for events "Kaoma Show".

Participation as a dancer in the children's TV show "Floricienta", Buenos Aires.

Participation in the advertising for Telefónica "Talk-Talk" for the United Kingdom, Fleners