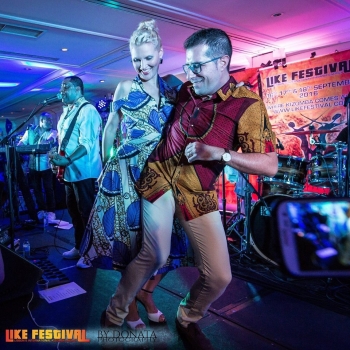 "I was born in Lisbon, Portugal, where I had my education studying Business administration.

Salsa was my 1st love, in 1999, Kizomba came into my life in 2007, taking the line from my master and friend Kwenda Lima, who told me "Kizomba it's danced by two people in just one body" this comment changed my view that these days I say "I love this culture more than my own". Having inspiration’s such as Master Petchu, Kwenda Lima and Afrolatin Connection I have developed my own style!

In May 2010 I was invited to perform Semba at the prestigious Africadançar. I've been teaching and performing at several events around the world in more than 30 countries including Major Countries in Europe, USA, Russia, Brasil, to name a few and organising my own Renowned Festival in Lisbon "the LIKE Festival" since 2010, Toma-Toma Bratislava with Alvaro Gustavo since 2013 and LIKE London with Mambo City since 2014.

In October 2010 I moved to London to teach and contribute to the growing Kizomba scene in the UK and moved to Stockholm in February 2012 created 1st Kizomba Scene in Stockholm under the name of Kizombafeber along with my current dancing partner Giedre Lapaite. In 2015 I have moved to Frankfurt, Germany, where I'm living and giving regular classes."

GIEDRE LAPAITE – Lithuanian girl with Ballroom, LA and Cuban Salsa background. She tried first steps of Kizomba in Vilnius, Lithuania, got very interested in dance and culture and started to travel to Portugal in order become a good Kizomba dancer. In 2011 she met Joao Rocha, who has given her love to Semba and invited her to teach together. In 2012 Giedre deepened her knowledge of Angola’s history and culture with Master Petchu and Vanessa. In the same year she moved to Stockholm, Sweden, started to give regular kizomba, semba classes and organize kizomba events with Joao Rocha. Her main interest is to teach very well structured classes, to give as much information for ladies as possible to be good followers. She has already taught in numerous kizomba festivals in Norway, Sweden, Finland, Lithuania, Latvia, Estonia, Poland, Belarus, Russia, Germany, Austria, Hungary, Netherlands, United Kingdom, Ireland, France, Slovakia, Czech Republic, Italy, Spain, Portugal, Canada. From 2013 she has joined organization team of prestigious kizomba festival in Lisbon– “LIKE”, in 2014 - “LOVE LIKE LONDON” kizomba festival in London, in 2015 - "Djs Delight" and "Kizomba Sunrise".

At the moment Giedre and Joao give regular classes in Frankfurt (Germany), organize international kizomba events in Stockholm, they were invited for regular kizomba courses in Berlin, Helsinki and for many kizomba festivals all around the world.

Their classes are known as very detailed and highly technical, they focus on traditional kizomba and semba, pay a lot of attention to the Angolan culture, introduce retro music to the classes, teach not only kizomba, semba, tarraxinha, but also they give classes of old school kizomba flow, leading and following techniques, musicality. They created modern class of kizomba with tango influence, which got one of their most popular classes at the moment.