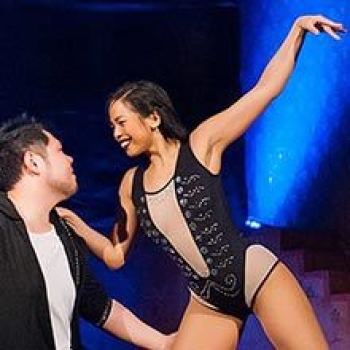 Daniel first burst onto the Bachata scene with his team “Reyes del Ritmo” who are the current UK Bachata Masters Team Champions. He went on to represent the UK with Reyes del Ritmo in February 2014 against other Champions from around the world at the World Bachata Masters where they placed 8th in the World. Daniel’s passion for bachata has seen him become a popular teacher in his home city of London, with his classes exuding a relaxed atmosphere with a strong emphasis on having fun along the way. It has been said that he has a unique style which has been labelled as “ChongChata” amongst London Bachateros.

Fresh on the Bachata scene, Pebbles took the London scene by storm when she partnered Daniel to win the first London heat of the Bachata Stars UK Competition.With a background in Hip Hop, and Commercial dance, she has drawn on her previous experiences to fuel her passion for Bachata. Always with a smile on her face she brings positive and cheeky energy to the classes.Together Daniel & Pebbles are skilled in all the Bachata styles, Moderna, Sensual and Dominican, adding their own flavour. They utilise this knowledge to interpret the music and use tools and concepts from each style to do so. They regularly teach Bachata and Salsa in London, and were recently placed 4th at the Bachata Stars UK Finals, and unofficially labelled the “People’s Champions".Daniel & Pebbles were subsequently invited to represent the UK at the Bachata Stars International Competition in Salamanca, Spain 2014.