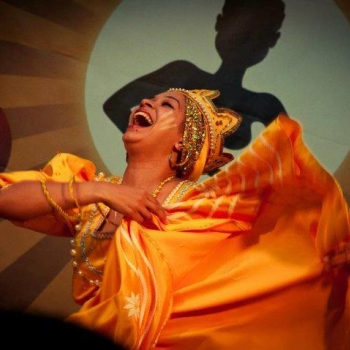 Ismaray Chacón ‘Aspirina’ started her processional career with the group ‘Obini Bata’ as a dancer, singer and percussionist of the Afro-Cuban culture.
In 2008 she went to Singapore for a year, where she worked as percussionist in a group of Cuban Timba.
Coming back to Cuba she became a member of the ‘Coro Folklórico Nacional’ and of ‘Rumberos de Cuba’ and demonstrated her knowledge in different folk groups of the first level.
She is a dance and percussion teacher of the Afro-Cuban and popular Cuban culture.
Currently she lives in Europe (Switzerland) where she presents shows and teaches her family’s culture, tradition and knowledge.
Charisma, knowledge, creativity and energy characterize Ismaray Chacón ‘Aspirina’.