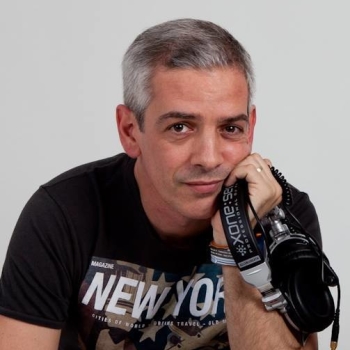 Nuno Melo discovers Latin-american music and Salsa in 1996. The first experiences as a Salsa DJ started in 1999 with small and occasional parties and soon started organizing regular Salsa parties, some of them continue until today as, for example, the “SalsaViva Party” in Almada. Since 2001 collaborated as a DJ in most of the Salsa Clubs/discos as, for example, Barrio Latino (Lisboa), Havana Docas (Lisboa), JAMP (Lisboa), Teatro da Luz (Lisboa), Muxima (Porto), Broadway (Coimbra), El Sonero (Porto), Look Café (Setúbal), Sabor Latino (Leiria). Was a DJ in parties happening in some of the most popular discos in Lisbon as the Blues Café, Kapital, Docs, Coconuts, Bar do Guincho. It is the official DJ and one of the organizers of the oldest Salsa parties in Portugal: Salsaviva in Almada (Since 2001 until now). At the moment is one of the organizers of the Palladium Nights and Lisbon Salsa Vinyl Sessions, two of the most popular Salsa parties in Portugal at this moment.