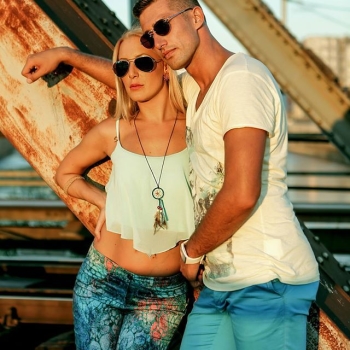 Sanja Stulic and Dejan Stosic were born in Nis, Serbia in 1986. They have been dancing since their early childhood. They have made their first dance steps in Ballroom and Latin dances, where they have accomplished top results on the national and the international dance scene. They are multiple state champions in Ballroom dances and combinations. They started dancing salsa in 2004, at the end of their professional sport dance career and ever since then salsa and other social dances have been their greatest love.

They made their first salsa steps completely unexpectedly by visiting a local dance studio where they started their dance career as children. Having a great desire to make progress and improve their dance skills they soon started attending salsa festivals in the region and later on the festivals around Europe having private lessons with the world’s most renowned instructors. Upon discovering salsa and entering the world of social dances, they started learning and perfecting Agrentine tango and Bachata first, and later on Kizomba and all that due to their great love and interest towards various dance styles.

Shortly after their success in competitions they were for the first time invited to work as instructors at the first Serbian Salsa Congress (Belgrade), Salsa Motion Weekend (Belgrade) and Cubanero (Novi Sad), where they started their career of dance instructors firstly at salsa festivals in Serbia, and later on at regional and international salsa festivals (Bosnia and Herzegovina, Croatia, Slovenia, Austria, Germany, India etc.)

The knowledge of variety of dance forms and a wide array of dance discipline have defined the development of their unique/specific dance style which represents a fusion of different dances which permeate all their performances accompanied by musical diversity and specific topics at the same time. Given the fact that dance is an art of movement and non-verbal communication and that each movement tells its own story, each of their performances tends to be dynamic and captures the essence of the story thus connecting to the artistic audience and touching their feelings.

Ten years of experience in working with people, at first in a dance studio where they made their first steps and later as one of the founders of the dance studio “Revolution”, as well as the academic education in the field of methodology of training, have helped them in their approach to people and also helped them nourish the learning process of their students. Their communication technique with the group they teach is excellent and their classes are always amusing and enjoyable; dedicated teachers who help each and every individual perform at their best, very patient and understanding of their students learning pace. Their down-to-earth approach, their straightforwardness and openness in communication with students, festival organizers and promoters are the things that they are associated with and which enabled them not only to have a great cooperation with people but also to make friends all around the world.

They have participated in the TV show “I’ve got talent” and in addition to being participants and dancers in the show they were also choreographers of several dance performances as well as choreographers of numerous dance performances for smaller and larger dance groups at various competitions and events. They are active participants in projects for regional development of sport and culture in cooperation with government and non-government organizations and they are also organizers of numerous smaller seminars and educational programs with the aim of popularizing dance and spreading dance culture in Nis and the surrounding areas.

Their free time, which unfortunately they do not have much, they spend enjoying the sounds of electro and club music, dreaming about going to Tomorrow land and spending their precious moments with their families and friends.