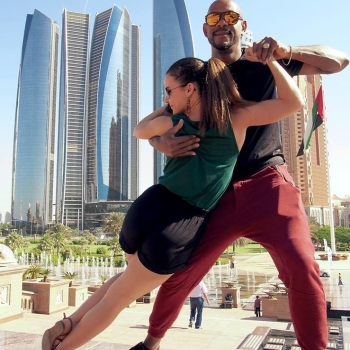 Mafalda was born in Porto, Portugal. She started dancing salsa in 2001, but soon enough discovered the magic ways of kizomba and semba by which she fell in love with. In 2007, Mafalda became a member of “Afrolatin Connection” group, which she was part of for three years. As she won the first international kizomba championship in the event “Africadançar” in 2008, her career boomed and many opportunities came along from then on. Next year Mafalda was awarded with the third place in the first Salsa Open competition in Portugal. Since then, she has been performing and teaching in inumerous kizomba and salsa festivals around the world, as in clubs, television shows and videoclips. She developed her own style, specializing in kizomba's body movement, having worked with many different people.