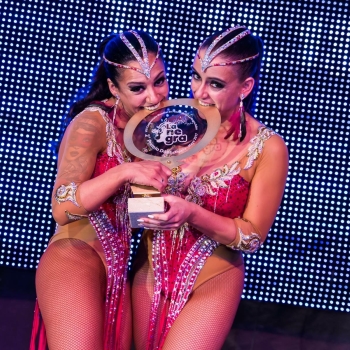 Lucia Medina was born in 1982 in Montevideo-Uruguay.

She has been dedicating herself to artistic and acrobatic skating since she is seven years old, up until she discovers her passion for hairdressing.

She arrived in Madrid in 2000 and later in 2001 she settled in Galicia with the intention of furthering her studies in this field, homologating her degree and taking courses in different cities, including Barcelona and Madrid.

During her Galician years she discovers zouk and in one of her trips to visit her family back in Uruguay, she discovers her passion for the stage, participating in the category of Humorists in the Uruguayan carnival and several music magazines.

In 2016 she settled in Barcelona and while exercising her profession as hairdresser she discovers a new hobby: Salsa.

Her first contact with this dance style happened by the hand of Mr. Ramon Morales, followed by the wonderful Adrian and Anita who have been her teachers for 5 years. During this period of time she was part of the “Adrian and Anita Amateur Salsa Company”. After this experience she decided to give up on the hairdresser career in order to dedicate herself to Salsa.

Apart from the achievements accomplished with this company we can highlight a second place in the Campeonato de Pasos Libres with her team mate Laura Moreno and a fourth place with her teammate Javier Padilla in the Amateur Salsa Competition.

From that moment onwards she starts to teach regular classes and to dance professionally in many national and international salsa congresses including Latin America.

From 2013 to 2014 she is the dance partner of Mr. Franco Rocha and from 2015 to 2016 she partners with Angel Llao, with whom they obtain the title of Spain Salsa Champions for two consecutive years.

In 2017 together with her dance partner Nuria Rodriguez Dieste, they are awarded runner-up In the Campeonato Mundial de Pasos Libres in the duos category.

In the same year, she integrates the Fogarate dance company directed by Mr. Juan Matos.