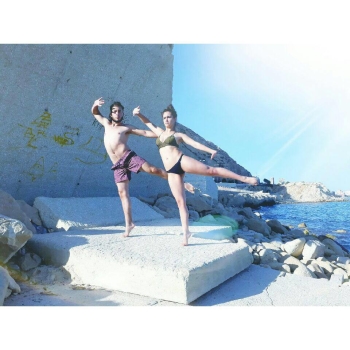 David was born in Ecuateur November 17, 1994. He arrived in France at the age of 5 years. During all his school years, it is going to develop a musical sensitivity and artistic, it will take between another few courses of Breakdance with the highly recognized structure Fantastik Armada.

In 2009, with the support of his mom, he deepened his knowledge of Latin dance and afro-caribbean in particular, taking her first classes in bachata and reggaeton in a dance school with Paola Gallindo.

In 2011, he starts his first experiences teaching as an assistant to Cyril Baltyde.

In 2014, he decided to devote himself to dance and especially to bachata. He won 2 contest enthusiasts who will be more known to the general public and organizers parisian and provincial.

In October 2016, he finished 3rd on the podium national BachataStars with Raphaëlle Dhautel, this ranking is all the more critical since the 5 champions of France competed in this edition.

They are now qualified for the final of the Bachatart which will take place in Aubagne in September 2017.

Dancer versatile teacher and choreographer, Ysénah started with the classical dance at the age of 4 years.

2010 : at age 11 she discovered the dance sport and practice the 10 ballroom dances in competition.

In 2012 : in the meantime, at the age of 13 years she enters in the world of "afro latino" and decides to fully devote himself to writing.

It is formed first of all in salsa puerto rican, then she has participated in many festivals in order to develop skills in cuban salsa, bachata, bachatango, sound, ragga/dance hall, and argentine tango.

In 2014, she will train in Portugal Kizomba and Bachata to acquire a better technique and was a finalist the same year in France Kizomba Tour.

In 2015, she co-founded with Sadine "Kiz'illusion" that develops a new concept of kizomba fusion and travelled through Europe (Italy, Sweden, Germany, Spain,...)

In 2016 she released her concept of the "Beer Ysénah Style" that offers a lady style choreographed , access on the musicality with a unique style enriched by his many training courses

She is teaching now Kizomba, semba, bachata and salsa to share his unconditional love of dance and the concepts so festive that accompany it : sharing, passion, creativity.

In may 2017, 17-year-old, she starts a new adventure with David Gomez in many artistic projects.