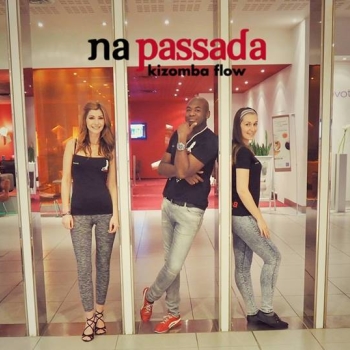 Na Passada Loosely translated it means sequential steps, and that's what you do when you are dancing Kizomba. Two dancers connecting free of thought and letting themselves being led by the sensual rhythms from Angola, Cape Verde, Guinea-Bissau, Mozambique, São Tomé, Príncipe and Equatorial Guinea, where the dance and music originate from. This way of dancing gives a whole new dimension to leading and being led.

What can you expect?

In our opinion the most important thing in Kizomba is to have fun while dancing.... come on... even the word means 'party'.... ;)

To maximize the chance of fun for both leader and follower, we find it important that the leaders learn how to lead properly and the followers how to follow of course. Besides the game of leading and following, it is just as important to understand and master the basic elements of dance, music and cultural backgrounds. During our workshops we put great emphasis on the basics and the techniques to find the right connection and musicality.

Like we already mentioned above, kizomba means Party and it is a word that comes from Kimbundu, the Angolan dialect. Kizomba was born in the end of 80's beginning of 90's by the famous group Kassav, that mixed the Zouk music from the French Antilles with several rhythms from Africa, especially Semba from Angola, Coladeira from Cape Verde and other rhythms from Portuguese spoken countries. Kizomba is having a natural evolution, but an effort should be made to always respect the traditional foundations of this dance and music. Kizomba is a beautiful, passionate and social dance, where you should dance for/with your partner, and not for the crowd around you. It is an energy interaction between both Souls.

We chose this name to fit our style of teaching. During the classes and workshops, we focus on techniques that will help people to get control over their body. This then will result in better leaders and followers in our opinion.