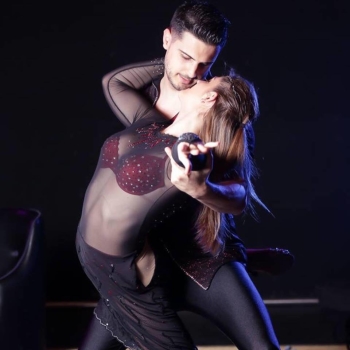 Alex and Delphine, dancers of bachata in Paris. We do shows, competitions and workshops of Bachata for local festivals and national and international congresses.

Delphine, is a former gymnast of rhythmic gymnastics, with a past as a classical dancer. Happens by chance, in the middle of the Latin dances and is rapidly improving to the rhythms of their many nights. In constant search of new sources of inspiration, she likes to create her own style, influenced both by the Bachata, Kizomba or Salsa. She likes body to body technique and sensuality to make every dance, a time to share.

Alex is a former gymnast at the national level. He discovered Bachata and Kizomba during a period of recovery after an injury at the age of 21 years. He has his own style, mixing urban music with a modern touch and sensual Spanish. Begin to practice Latin dances.

Subsequently, we have completed training in the foam of the international festivals in order to refine the practice of these 2 dances. For more than a year now, they offer private lessons and have started to give classes at the International school of Dance of the Salsa Show, where they are taught together from September 2015 and the Barrio Mio, every Thursday.

Its pedagogy is based primarily on the research of the accuracy of the orientation and the musicality of the men and the promotion of sensuality and self-confidence for women. The courses are dynamic and take place in a relaxed atmosphere.

• February 2016: the classification for the Championship of France of the Bachata Open

• March 2016: the classification for the Championship of France Bachatart

• April 2016: 3rd in the French Championship of Bachata Open