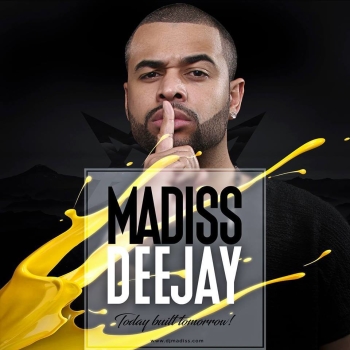 DJ Madiss is a prominent figure in the festivities of Paris.

His domain of predilection is the Kizomba.

From French/côte d'ivoire what could be more unexpected ? In fact, in the beginning, it will be treated of afro-caribbean rhythms, an experience that gives them a musical culture that is solid. But along the way, it's going to be very quickly with the public speaking and their needs are very specific.

It is thus that, little by little DJ Madiss is going to win the notoriety that we know today. Now, not a week goes by without being in the front of the stage.

Resident DJ at the Loft-Metropolis ( disco club, the largest island of france ), the palace nightclub, are all parisian clubs that have had the confidence... but the capital of PARIS was not enough for him, it will be called the mixer of Cannes, St Tropez, Nice Portugal London, the Reunion island, Croatia, Italy, Thailand, Guadeloupe and Martinique through saint LUCIA !

Don't worry if you have not yet crossed paths with him, it's going to be soon, for sure!