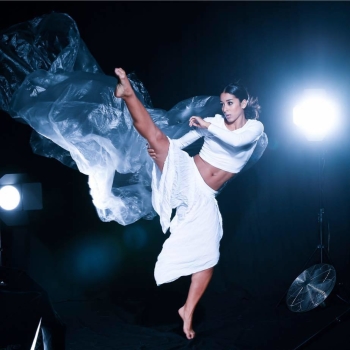 Kizzy García Vale, born in 1985 in Havana, Cuba, started her dance education at the Sport National School in Rhythmic Gymnastics at the age of four. Since 1996, she visited the Alejo Carpentie Ballet School in Havana for two years. She then pursued her studies at the National School of Art where she successfully graduated after 6 years with the certificate of Professional Dancer and Teacher for Modern and Contemporary Dance as well as Cuban Folklore Dances. Right after she began her professional career at Danza Contemporánea de Cuba, The national Dance Company. During three years, she had the opportunity to work with different international and national choreographers including among others Isidro Rolando, René de Cardenas, Osnel Delgado, Samir Akika, Lucas Bruni, Jan Linkens.

In 2007, after some cultural exchanges in Switzerland, with Kuska Cáceres and Palais du Monde Festival for example, Kizzy moved definitely to Zürich and continued her career as a freelance dancer in Switzerland and abroad, working with various freelance Companies and dance Productions, Television, Galas and Corporate Events, like Cie Konstantin Tsakalidis, Naway Company, Swiss Radio and Television SRF, Nadine Imboden GmbH, for Volkswagen Company, or Starlight Productions among others.

Besides she is also active as a teacher for Modern and Jazz dance in the Dance School Tanzwerk 101 in Zürich, and Salsa and Afro dance in Switzerland and Europe.