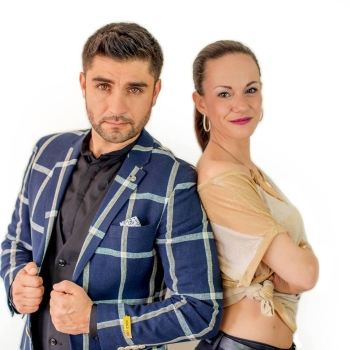 Dani and Milo have known each other for some years, but have recently joined forces after a mere coincidence. They are established in Copenhagen, Denmark and Malmö, Sweden where they have their regular classes in Kizomba and Semba.

In their teaching they focus on core values in order to create a solid foundation to enable more technical challenging steps. With a lot of positive energy and huge bucket of humor, but also with order and structure you will leave their class filled with happiness and a newfound way of experiencing Kizomba and Semba.

Dancing has always been a passion for Dani, starting with ballet at a very young age, then moving on to Pop and Latin dances, and finally finding her true passion in Kizomba. Born from a Mozambican mother she grew up listening to the music, but it was later on as an adult she decided to pursue her passion for Kizomba.
She sees herself as a second generation instructor as she is trained by the Masters and Kizomba pioneers in Europe: Petchu & Vanessa, Kwenda Lima, Helio Santos, Avelino Chantre & Joana Machado, Zé Barbosa & Marta Miranda and Ricardo & Paula. Learning through them gave her the tools to be one of the preeminent followers out there, and lately becoming an excellent leader as well.

Dani herself is a pioneer in many ways. She is the co-founder of Kizomba DK in Scandinavia, established in 2008. She has played a significant role and been the front figure representing and planting the Kizomba seed, and introducing this beautiful dance for the first time in many countries like Denmark, Sweden, Finland, Russia, Lithuania, Belarus etc. Kizomba DK has grown significantly since its introduction, from being a small number to a large dance community. Kizomba DK is very much alive still and fully managed by Dani.
Dani is known for her contagious positive energy and big smile, but also her deep knowledge of the dance and its roots. She counts 8 years of teaching and still going strong.

Milo is not your typical dancer but rather your typical jock, a fully-fledged footballer growing up with a football by his side at all times. Even though loud music and dancing was a rule rather than the exception in his upbringing, he discovered the love for dancing rather late in his life.

While traveling around South America in 2010 he got hooked on the Latin rhythms, especially Salsa and Bachata. Back home in Sweden after being away in South America for 6 months he accidentally stumbled over Kizomba during a Salsa class and it was love at first site. Suddenly all became very clear when he was introduced to Kizomba and Semba rhythms. He became captivated by the music and the way the dancers carry themselves floating through the dance floor. Kizomba brings a special connection between two people no other dance style can compete with, and Semba was a perfect match where he could use his football skills and creativity to express his inner spirit.

Ever since, he has devoted a good portion of his time to learn and understand the music, dance and its roots. He is schooled by the hands of Petchu & Vanessa and Ricardo & Paula (ALC), and inspired by many more.