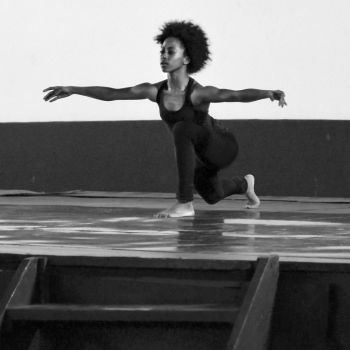 Yusimi Moya Rodriguez was born 1987 in Havana, Cuba. She began her career at the age of 12, when she entered the Escuela Nacional de Danza, a department of the reknown Escuela Nacional de Artes (ENA) in Havana. She graduated in 2005 receiving the Cuban diploma as a professional dancer and professor for contemporary and folkloric dances (Bailarín-Profesór de Danza Moderna y Folklórica).

She was picked by the "Conjunto Folklórico Nacional de Cuba" (also known as "Ballet Folklórico Nacional") and worked there for five years. Founded after the Revolution to preserve the african traditions dating back to the times of slavery, the company plays a unique role in shaping the cultural identity of the island – and african dance worldwide. Daily rehearsals accompanied by live drumming go hand in hand with ballet and modern classes. Yusimi Moya has been on world tour with different shows of the "Conjunto Folklórico" (Spain, Portugal, Netherlands, Mexico).
In 2011, after some major economical changes opened the market for private dance companies, Yusimi Moya Rodriguez joined the new and privately funded contemporary dance troup "Ebony", where she was working as a solo dancer for two years. Its 15 artists quickly became one of Havana's top picks in the dancing scene. Their works blend Modern technique, Afro-Carribean and popular styles in contemporary choreographies.

Yusimi Moya Rodriguez moved to Vienna, Europe, in 2013 and toured the country with the Latin dance musical "bailando". Her first site specific contemporary solo piece "Points of Passage" was shown at Melk Abbey in 2014. Its world famous baroque frescoes show an exotic depiction of items from afar. The dance piece is about the migration of images and dreams of the other, being reflected from both ways.

In 2015 she received a one-year artist working grant by the Austrian association "Kültürgemma" to develope a new dance piece. Entitled "Reset" the piece will premiere in 2016 in Vienna and talks about the political dimensions of dance education and identity with a strong focus on Cuba and its colonial history.
With choreographers Amanda Piña and Daniel Zimmermann (nadaproductions) she is currently working as a dancer in the new dance series "Four remarks on the history of dance". It was premiered at the Impulstanz Festival in 2015 and continued in theaters across Europe like deSingel in Antwerpen, Belgium, or Tanzquartier in Vienna.

Yusimi Moya is an experienced dance instructor. She is giving workshops on traditional and contemporary technique to professional and semi-professional dancers. With the Conjunto Folklórico she was teaching other dance companies in Cuba and abroad. Since she moved to Europe she regularly teaches at Salsa- and dancefestivals throughout Europe ("Salsafestival Zürich" and "Steps to get it", both in Switzerland, "Salsa on the Beach" in Italy, "Dance for two" in the Netherlands, etc.).