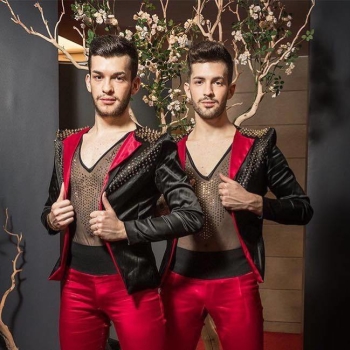 GABRIELE DI MARZO was born on April 12, 1994 in Rome, Italy. At the age of 8 he began to attend a sports center doing artistic gymnastics for several years, participating in regional and national competitions organized by the C.O.N.I. At the same time he began to dance in the hip hop company of Gabriele Vallifiori, participating in international competitions outside Rome.

She began to attend the Latin Energy Caribbean dance school directed by her parents Roberto Di Marzo and Alessandra Luzi, dancers since 1996 and after learning the basics, in 2007 she enrolled in the Portocubano school of the teachers Mauro Rossi and Emanuela Catena. Here you have the opportunity to deepen your studies in the Caribbean and limestone different stages of Rome and Italy by joining the Portocubano Dance Company led by Mauro Rossi. In 2009 she began studying with the Venezuelan teacher, formerly her teacher's teacher, Gertrudys Iglesias. In the same year, during an event in Montesilvano (Pescara) he met his current dancer Giada Cristofari, with whom he began to collaborate first under the direction of his teacher and then creating his own choreography and performing in many local Romans and very important events such as MaremmaQueSalsa, Eventopeople, Bailacalabria, Salsitaly, thus having the opportunity to study with high level international artists.

In 2010 she met Valerio Perla, her current music teacher, with whom she still studies and studies the rhythm and history of Caribbean dances with special attention to Cuban folklore, and who she had the opportunity to acquire from a practical point of view over the years with Graciela Chao Carbonero (dancer and teacher of the Conjunto Folklórico de La Habana, Cuba), Indira Pacheco Santamaría, Lilian Matos Torres and Alessandro Martignago. In the same year he was chosen by Cuban maestro and choreographer Lázaro Martín Díaz to collaborate with the Compañía Danza Popular in the musical Evolution Salsa.

In 2012 she attended courses in classical dance, directed by Piero Martelletta, and modern dance, directed by Marco and Stefano Stopponi, at the Crazy Gang School in Rome. Meanwhile, with the experience acquired in the Caribbean, he taught his first courses at the Portocubano school and in 2013 he created the choreography "Rebirth", performing it with the Portocubano Dance Company and enjoying great success both in Rome and in the events mentioned above, also participating in regional and national competitions (LIDCI and Stardust Trophy), always winning first place.

In the same year she joined the company of professional dancers of the Compañía Adoquín of the Cuban masters Rafael Hernández (choreographer of the Teatro América in Havana, Cuba) and Nathalie Mila (principal dancer of the Teatro América in Havana, Cuba), with whom she studied the Cuban technique of contemporary dance and deepened her knowledge of Afro-Cuban dances, and performed in places and events in Rome and around Italy.