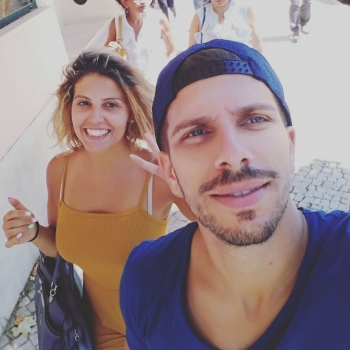 Luis and Catarina are Dance teachers and Performers

Luís Moreira e Catarina Monteiro are Portuguese, professors of Afro-Latino rhythms, such as Kizomba and Bachata.

Luís Moreira's route began in 2010 as a student at EDSAE (Lisbon) in Salsa and Kizomba. Participated in the choreographic study of Kizomba da EDSAE.

He started as a dancer in 2011 at CECSSAC, having been trained with professor Ouzin Gozmir (Love2Dance), who is from Kizomba quer de Bachata, a training that continues to date.

Since 2011, the choreographer Bachata Fusion (Love2Dance) has participated in numerous performances all over the country, in places such as Aveiro, Porto, Marinha Grande and Lisbon.

In 2013 he created the Ballare Creative project in a fundamental partnership with Almirante Bar!

Project with a concept for the realization of Afro-Latino classrooms and festivals, with the support of Catarina Monteiro, her class and performance partner.

With formation of week in 2014 with the champions of Africa to Dançar 2013, Dasmara and Holland.

In 2015 he started his career with the dance troupe Aché, made up of dancers Angel Rojas, Georgia Lacroix, Ouzin Gozmir, Ariella Pires, Tiago Ferreira, Diana Castanha and Fi Antunes. The base of the company are Cuban dances with the objective of sharing the whole history of the evolution of Cuban dance and culture.

This same year he was trained as a buzz instructor, practicing in various locations, such as Arte e Dança and Vivafit.

Catarina Monteiro began her career in the world of dance with 5 years of age, in Classical Dança, at the Conservatório de Dança in Tavira. Passing through Modern Dança, Hip Hop and theatre, he initiated the Afro-Latino dances 6 years ago as some at Academia Via Latina in Tavira.

Graduated in Dança at the Faculty of Human Mobility FMH - Lisbon, she participated in Erasmus in Malaga in the Conservatório Superior de Danza.

Her career as an instructor of Afro-Latino dance began with Luís Moreira in 2013, with whom she is currently working.

After the Zumba instructor's course launched the project "Rhythm on the line" in the area of Carcavelos.

In addition to adult classrooms, she also teaches zumba and dance classes for children.

Luís e Catarina created the Ballare Creative project, constituting at this moment a large part of the work in dance for both, at the level of classrooms and events.

Work together for Love2Dance as teachers and performers.