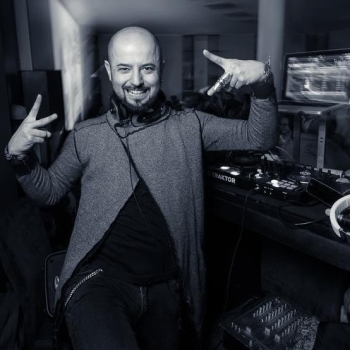 Ilker Türkmen alias Mambo Ilk was born on January 13, 1981 in Ordu, Turkey. He was first introduced to the world of dance at the tender age of 8 years old when he joined a children's folklore dance group in primary school. The group was directed by Gültekin Kiltan, who is currently the director of the Eurasian Dance Academy in Stuttgart. During the 3 years Ilker danced with this group, he and his friends won several local and regional championships. They also garnered 8th place at the national level competing in the Turkish championships in Gaziantep.

Ilker took a break from dancing for a period of time until being asked to be the dance partner of one of his friends at the Middle East Technical University (METU). By the age of 18, he attended a private school in Ankara and began to study various Latin American dances such as cha cha cha, American rumba, swing, jive, etc. He would then go out to dance socially and practice what he had learned. Within 4 short months he became the assistant to his dance teacher and continued to enhance his skills and perfect the various dances while adding his own style and flavor. Ilker was further trained by Viktoria Kahraman and Mine Akkoyun for approximately 3 years in international Latin dances in Ankara.

During his METU days, Ilker participated in Latin American dance competitions with his dance partner Ekin Sakin and they won 3rd place at the 1st Turkish Latin dance competition in 2001. They both also instructed at the METU dance club and performed in several places around Turkey. After leaving dance school, he was selected to be a dancer in the METU Dance Club. He danced with them for 3 1/2 years before moving to Germany in August 2003 to finish his Masters education in Energy Management.

In Germany he continued his passion for Latin dances by performing with Chiara Präg for 2 years. They participated in various competitions and won several cups in the C class dance category. In 2004, they placed 8th out of a total of 135 couples in their first competition in Hessen, Germany. Moreover, they won 1st place twice and 2nd place once, which qualified them to move up to the B class dance category.

Although there was lack of time for Ilker to really train while in pursuit of his Masters degree, his love for dancing would not allow him to abandon it altogether. This became more of a realization as he started to go out social dancing at the salsa clubs more and more. It did not take long before the fire was reignited in him once again, even though it had never really burned out.
In 2005 at a salsa party, Ilker met Aanyo Kuzeawu who is the director of Mamborico Dance Company based in Freiburg. After a short time, he joined Aanyo's group and started dancing mambo. He eventually started performing in different cities throughout Germany, France, Poland & Turkey. Ilker’s mentor Aanyo was very influential in the development of his style of dance and was very impressed with his progression early on.

After graduating and earning his Masters degree in September of 2006, Ilker moved to Karlsruhe to work for SIEMENS AG in the Business and Sales Development department.
However, even the degrees he earned could not change his mind and love for salsa, so he kept improving himself by his own training which included attending several congresses around Europe.
He took classes and attended numerous workshops from various instructors like Victoria Kahraman, Mine Akkoyun, Nathalie Trandin, Dennis Tischmacher, Aanyo Kuzeawu, Juan Matos, Thomas Guerrero from Santo Rico, Yamulee Dancers, Adolfo Indacochea, Hacha y Machete, etc.

Ilker is currently teaching Bachata in Karlsruhe and also gives private lessons and workshops, courses according to demand in Karlsruhe, Frankfurt, Stuttgart, Heidelberg and at several international dance festivals. Ilker remembers each of his instructors throughout all the years that he has been dancing and has much respect for them and what they do. He believes there is always something to learn from everyone, and the best way to improve is not to deny the information that you need.