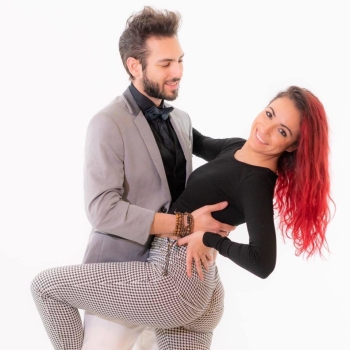 Stephanie, at the age of 6, Stéphanie began dancing with Jazz and Modern Jazz, which she practiced for more than 10 years and still practices today.
Attracted by the world of cabaret, she trained in this discipline with the company of Patsy'girls for 8 years.
Professional dancer for 5 years, Stéphanie has specialized in cabaret style. She is part of the company of Ladies and Gentlemen and also dances in the cabaret les Folies Lyonnaises as well as in several French shows in Lyon. She is also a magical assistant together with Christophe Mervil.
From the end of 2015, she decided to start dancing in pairs and especially in Kizomba. He also trained at the Brazilian Zouk in the teacher training course MAC (Method Alexandre De Carvalho) in Paris and began teaching in September 2018. During the same year, she also participated in Bachat'Art, a renowned Bachat'Art contest, and came in seventh place nationally with her partner Daniel.
In September 2018, he met Benjamin and a true sense of dance was created, which gave rise to a new and promising partnership.
In 2013 Benjamin decided to start dancing and took his first Kizomba class.
He continues his apprenticeship in the region, but quickly, thirsty to learn, the region is no longer enough for him and he goes to the biggest French and then European festivals, where he will train with all the big names of this discipline to perfect his career.
In 2015 he met his former partner, Céline Chemineau, and formed a duo with which he will participate in Kizomba's biggest competition: AfricaDançar in 2016. The result is very promising since he will achieve with his ex-duo the position of Vice-Champion of France in Paris as well as the 7th in Lisbon in Portugal during the world classification AfricaDançar.
He decided to perfect his skills in pedagogy, and therefore enrolled in a training program called "Trainer of dances from here and elsewhere" directed by qualified people who are still training for the State Diploma of Dance (Jazz/Classical/Contemporary) and obtained his certificate. Also in 2016, destiny brought with it the THE TEACHER contest, in which many teachers from Paris and the provinces participated. He will be chosen best teacher and therefore Champion "THE MASTER 2016" by winning this contest with his ex-duo.
That same year, SYS CREW recruited choreographers in Paris, a project of a collective of artists directed by Laurent Yishu, so he went to the casting and was selected to be part of the team of dancers and choreographers of "SHOW YOUR STYLE".
In 2018, his association with Celine ends and evolves in the form of collaboration with several talented dancers.
During a congress in Aubagne, the Bachat'Art, met Stéphanie Roche, for whom she had an enlightenment within a dance session. A great feeling, a rare fluidity and a great understanding made them both decide to start a very promising partnership!
She has given hundreds of workshops to date all over France, abroad in Europe, as well as in some countries on other continents (United States, Mexico...) and continues to communicate her passion and particular vision of dance with Stéphanie.
#STEPHANIEBENJAMIN
contact: benjaminstephaniekizomba@gmail.com