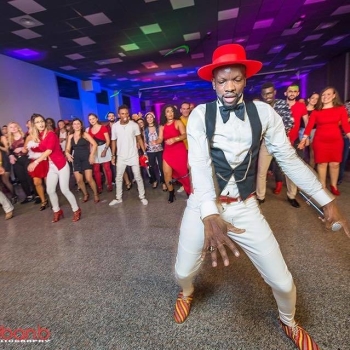 Mandela Mandela was Born in Angola 23/11 in one of the neighborhoods on the outskirts of Luanda ( Rangel ) big school, Semba Kuduro etc. For 10 years he was part of a group along with 4 young people. This in the year 1985, at the time was the Capreko, Bungula, Cabetula, Vaiola, etc.

Having acted in two emblemáti recreational centers: Candimba and Sengula. Mandela Mandela have as references Elizeu and Zero 7 (wizard and witch), great dancers at the time, Man skin angry (the king) and Ze witch( the mute )

The dance although do part was always hidden from her father, due to the religious orientation within the family.

In 1992, immigration to Portugal via construction where he remained 4 years in Lisbon .

In the same year dedicated to gospel music and Missionary work christian. Years after exchange the south by the north . Viana do Castelo and Barcelos, as aide-marble expert in the various cemeteries . Later in Viseu where you took the course of a Missionary for three months, theoretical and practical .

In 1997 as a commercial agent resumes the contact with the dance. Creates several classes of the various african rhythms in the cities of the north of Portugal: Porto, Maia, vila nova de Famalicão,Braga,Viana do castelo,Póvoa de varzim and Vila do Conde. He also participates in various cultural events as a Dancer, Choreographer, Jury, Animator Socio-Cultural, etc.

Was also present in several television programs : RTP, SIC and more recently in PORTO CANAL , RTP AFRICA, AND TPA public television OF ANGOLA through the programme PEOPLE OF the BAND . Where it tells the story of the first Angolan to take the Kizomba arabian peninsula

In 2006, combines the dance to volunteer in two charities: the House of the Bosom and Home of the host, Learn where she collaborates as an animator of social and cultural groups of children protected by the court.

These are the next events where Mandela Mandela will participate soon