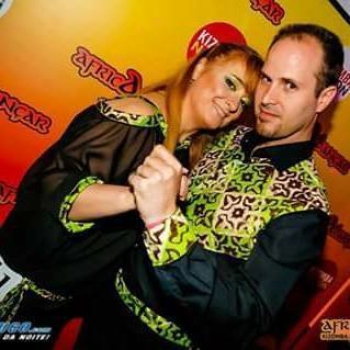 Belén and Javi are a couple from Madrid whose passion is dance.
Belén started in classical dance as a child, and later continued her training in Ballroom Dances and Latin Rhythms with dancers of the stature of Toni Escartín, Marcelo and Marcela, JuanMa Nieto & Natalia Vicente, José Antonio Soto and Daniel Castillo, among others.
Javier started out in Ballroom dancing and Latin rhythms in 2004 thanks to Belén, and since then both continue their training together as a dance couple.
Both discover the Kizomba at the International Salsa Symposium in Madrid, and from there they begin to take regular classes with the master Albir Rojas in 2008. Since then they continue their training with him, besides attending numerous international congresses of African and intensive rhythms, with masters like Petchú and Vanesa, Kwenda Lima, Helio Santos, Afrolatin Connection, Bonifacio, Mr. Tecas & Miss Jo...
In 2013, 2014 and 2015 they compete in the International Kizomba Championship "Africadançar" and in the International Kizomba Open, obtaining in both cases the 2nd place in the national championship, representing Spain in the international finals.
Since 2011 they have been teaching kizomba and semba classes and workshops in Tenerife, moving to Madrid in 2014, where they currently live and continue to teach as teachers at numerous national and international congresses.
Javi and Belén Prizes
1st Prize of the Community of Madrid (1990, 1991) in the Swing category.
1st Prize of the Universal Hall (1990, 1991) in the categories of Swing, Waltz, Merengue, Chachachá, Salsa, Rock & Roll and Tango.
1st Prize Latin Dance Competition of the E.T.S.I. Telecommunications of Madrid (2005)
1st Prize Happenig Dance Competition (2005).
Africadançar finalists 2013, 2014 and 2015.
2nd place Kizomba Open Spain 2013.
6th place International Kizomba Open 2013.
2nd place Africadançar Spain 2014 and 2015.
Translated with www.DeepL.com/Translator