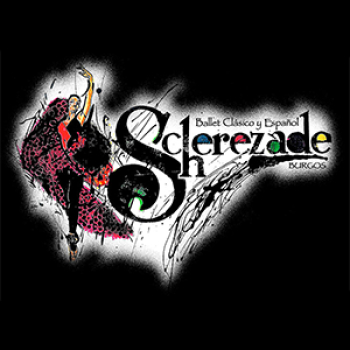 The Ballet Clásico y Español SCHEREZADE was created in 1983 and is directed by Mª José González Bayona, a teacher with a professional degree in dance and a degree in Economics, who, in addition to directing the Centro de Danza Mª José de Burgos, is the creator of the choreographies that each year make up the new programme to be represented (El Corsario, Coppelia, Bolero de Ravel, La Fille Malgardé, Cinderella...).

Since its creation, our training has been based on the discipline of the Vaganova school in Moscow and it is this classical training that makes it easier for the young ballet members to develop the other dance disciplines that make up their repertoire.

Classical dance, Spanish dance, traditional dance and flamenco are fused in each of the performances we perform, which makes us a unique case within the dance companies, generally specialized in some of the disciplines mentioned above.

The diversity of contents and styles, the richness of the costumes and a delicate staging give as a final result a varied show, capable of satisfying the demands and expectations of all kinds of audiences until its recognition and applause are achieved.

Our performances are configured as a miscellany of different dance styles: we start the programme with variations of classical ballet, continue with Spanish classical dance, flamenco, flamenco-fusion and end with the "Gran Jota de la Dolores" by the maestro Bretón as a representation of traditional Spanish dance.

The Classical and Spanish Ballet SCHEREZADE has carried out repeated performances promoted both by the City Council of Burgos (Festivals of San Pedro, Cultural Autumn... ), Diputación (Day of the Province), Junta de Castilla y León and by the different social agents and it is habitual their participation in the patron saint festivities of different localities.

Their representations have also obtained a notable success outside our provincial environment, with representations, among other localities, in Palencia, Valladolid, Madrid, Toledo, La Rioja.

Outside our frontiers, the Ballet Scherezade has gone as a cultural representation to the French towns of Lyon - an event organized by the Casa de España - and Romorantin on the occasion of the twinning of this town with Aranda de Duero.

Opening hours to the public of Ballet Scherezade

Dancint styles you can dance at Ballet Scherezade courses