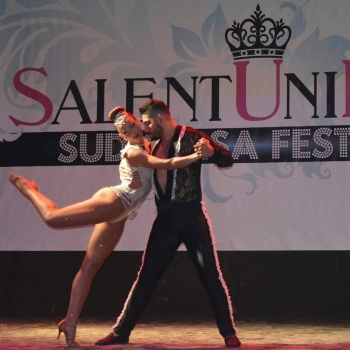 Willy and Noura dancers and teachers together since 2011 ;they have been World champions and HONG KONG SALSA CONGRESS in 2014 with a choreography of salsa in colombia.

After studying at the competitive level at the academy teachers dance to FUEGO LATIN master, Simone Ripa,have specialized in the study of Salsa Los Angeles Style salsa Colombian dancer and choreographer Marvin Ramos still train, have examined in other studies with the maestro Pedro Gomez .Fans and promoters of the DOMINICAN BACHATA; starting two years ago, a path of teaching, founding the school of dance the PASO DE AZUQUITA -at the academy of dance -NOVADANZA -VIA DEGLI ABETI 67/ A-cooperate with other schools such as that of PEDRO GOMEZ AND THE SALSERISSIMO SCHOOL TEACHER MICHEL RAMOS /ALSO COLLABORATE WITH OTHER SCHOOLS in rome AS a TEACHER OF DOMINICAN BACHATA WITH the STAGE .

Guests also abroad with their performances and workshops as emerging Artists.

2013, with the congress Salsa on the Lake (Bolsena lake -ITALY)

Born in Lima, Peru, in 1988. Begins to approach the world of salsa thanks to the insistence of his sister, who enrolled him in a school of the sauce because he had sensed the talent and the passion of the brother towards the dance floor.

Starts his career as a dancer in Italy at the age of 18 years with the maestro Simone Ripa of the school Fuego Latino. Becomes early dancer racing competing in calle A2, together with Noura.

At the same time, undertakes as assistant to the master Jonny Ramos in Ramos School.

In 2012, Rai One morning and won the competition together with Noura.

In addition to teaching in their school in Rome In Paso de Azuquita, is part of the dance company of Marvin Ramos. With Noura performing in numerous dance shows in Italy and abroad.

Becomes familiar with the dance, only 5 years through the lessons of learning from classical ballet taught by the school Of Art in Rome. Two years after he moved to the French academy The Maision de the Dance of the master Denis Ganiò, one of the greatest dancers and choreographers of the French of the years ’80 and ’90. Among his teachers Manuela Cerreto Academy (Rome), Christian Baron (the Opera house) and " Virginei Morvant (Ballet of Marseille). In the same school, she also studied piano for 6 years with Marian Bolojovi, coming from the Bolshoi of Moscow.

He made his debut as professionsita at the Olympic Theatre, but shortly after he must stop his nascent career as a classical dancer for the school commitments. Learn other styles of dance (modern dance, Hi Hop, belly dance with the teacher the syrian Mona and in 2011 began studying the caribbean dances at the Academy of Dance Teacher Fuego Latino Roma, proving to be an incredible talent, and has participated in numerous races in the class A2

In 2012 participates in “Rai Uno mattina” on TV, winning the competition of dancing with his group at the Academy. In May 2012 he joined the cast of Marvin Ramos and specializes in the discipline of salsa in colombia known as the salsa caleña, that is, of Cali, Colombia.