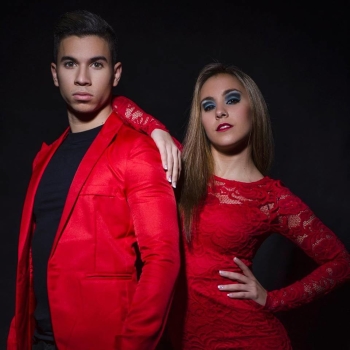 Pablo Pérez started dancing bachata in 2010 with Korke Escalona and Judith Cordero pioneers and precursors worldwide this style,(Bachata Sensual) and thank to his latin roots he started dancing colombian folkclore himself while developing skills in the Dominican bachata with renowned professionals. In 2012 gets his first place in the national championship "Bachatart Spain Edition" with his previous partner. Later he continues his training with international mambo dancers like Eddie Torres, Juan Pachanga Matos or Adolfo Indacoechea among others. In May 2014 he reached the first place at the "Footwork World Championship" competition - FWC in the category of groups held in Badajoz (Spain).

Raquel Castro starts their training in several disciplines from contemporary and jazz, to urban styles in his hometown Salamanca. But it was not until 2012 when she joined Adrian and Anita Salsa Company - World Salsa Champions - in Valladolid and began her career in Latin rhythms. At the same time, among several local dancers, creates her own team "Fusion Latina Salamanca" getting crowned champions of "Spain Bachata Masters Teams" for two consecutive years and qualified for the international competition "World Bachata Masters" in which they obtained a third and a second place in 2014 and 2015 respectively.

Recently they reached 4th place at World Bachata Masters 2016, one of the most prestigious bachata couples competition around the world.

They travel teaching and sharing their style around Spain and Europe giving a different perspective of the current bachata background.

Dancing is their job and passion and because of that they continue their training being part of several professional salsa and bachata teams, and learning from the greatest dominican and sensual bachata instructors.

These are the next events where Pablo & Raquel will participate soon