The origins of Salsa and its history

Salsa is a set of Afro-Caribbean rhythms fused with jazz and other styles. The truth is that its origins have always been much debated, although as a general rule it is mentioned that it comes from a fusion that came from Africa in the Caribbean when they heard European music and wanted to mix it with their drums.

These origins focus especially on mambo, danzó, cha cha chá, guaracha and son montuno, later enriched with instruments such as saxophone, trumpet or trombone. (By the way, if you want to learn to dance salsa, we leave you our directory with more than 700 schools that teach salsa!)

The history of the first Afro-Caribbean rhythms

It was the Cuban exiles and those from Puerto Rico who popularized salsa in New York back in the 1950s. But it wasn't until the last third of this century that salsa dancing began to take off all over the world.

Cuba played a leading role in the origin of salsa. Already in the 1930s, melodies and rhythms from Africa were playing on the Caribbean island. Among them was the danzón, a musical piece acquired by the French who had fled Haiti.

History tells us that it was these first rhythms that were then mixed with rumbas such as guagancó and sonero to begin to create their own Afro-Cuban rhythms, including Afro-Cuban jazz, mambo, guaracha, Cuban son and montuno.

The exquisite melody of these new rhythms soon set in other Latin American countries. Puerto Rico and Colombia were the first to welcome these new sounds from the Cuban country.

However, it was not until their appearance in the United States, and more specifically in the Bronx neighborhood of New York, when these rhythms acquired a greater impact. It was the moment in which new musical instruments were added that today form an indissoluble part of salsa.

The great Cuban musicians who moved to New York along with the wave of these new rhythms created the famous tumbadoras, congas or son montuno, and were responsible for introducing trombones and guaracha.

From here, salsa began to take on an unexpected boom. The great musicians continued to add new rhythms and musical instruments, such as the trumpet, violin, flute or charanga among others.

The origin and history of the term salsa

However, it was not until the late 1960s and early 1970s that the name salsa began to emerge as a musical genre. It is since then when Latin music is represented by this genre, reaching in the first place a notable repercussion in the United States.

This process was carried out in a very curious way: Izzy Sanabria, graphic designer at the Fania All Stars studios, brought together all the rhythms of Cuban origin that had until then been under the same name. The intention was to eliminate confusion and be able to sell the concept much better.

Advertising poster for the TV show "Salsa", which had Izzy Sanabria as a guest 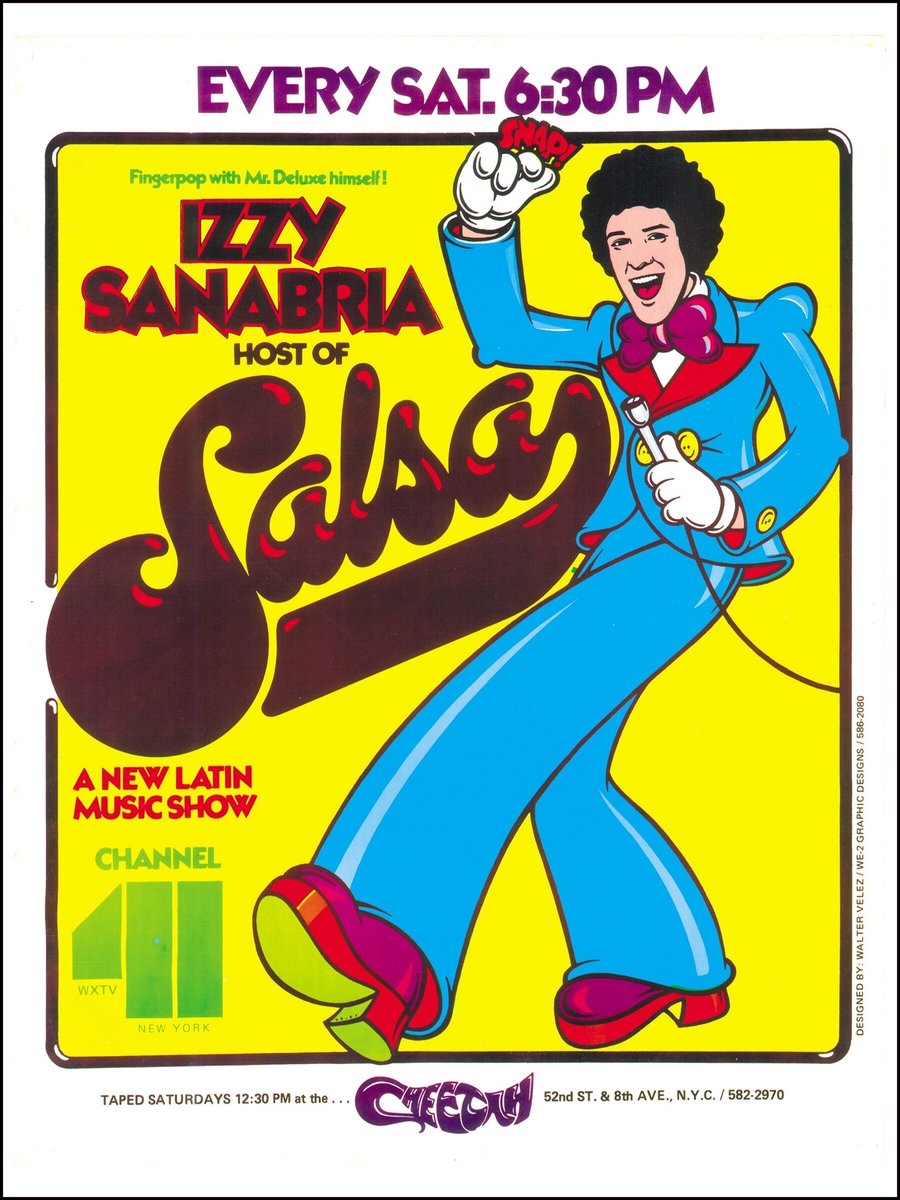 In this way, the term it used to agglutinate all these dispersed sounds was salsa, a meaning with which bands were encouraged to increase energy during performance.

Thus, and taking into account what has been seen so far, it can be said that salsa, as a set of a series of rhythms and styles, was born in Cuba but it was in the United States where it was mainly developed and launched all over the world.

It is often said that the main influence of salsa is the Cuban son. But, in view of its origin in the succession of styles and rhythms, it is also true to say that it has recognized influences from mambo, cha cha chá, guaracha, rumba, bomba, plena and merengue.

The Origin of the Salsa Dance Steps

Once salsa was defined as a musical genre in the 1970s, the movements and steps of its dance were collected through a fusion of the African with the European.

These steps and movements of salsa fundamentally reflect the influence of the dances that the Africans brought to the Caribbean and the European dances that have been danced in Cuba since the 1930s.

So much so that the basic steps of salsa are precisely the same steps as the Cuban son, just as it also includes steps that can be seen in rumba, danzón and mambo.

Salsa actually has a basic step that is common to all styles. But each of these styles has its own way of dancing and executing the steps.

The origin of these variants is in the regions where this style comes from, which are the ones that developed each dance, always under the same umbrella of the term salsa.

It is not surprising, then, that salsa is defined as the result of a series of social conditions and the evolution of a series of rhythms and melodies from Cuba, which were developed and achieved repercussion in the United States.

There are those who assure against this mixture that salsa is neither a rhythm nor a style, but rather a term that serves to represent all the music of Afro-Cuban origin that emerged in the first decades of the twentieth century.

In short, the origin of salsa has always been, and will continue to be, much discussed. American musician Tito Puente was right when he said, "Salsa doesn't exist. What they now call salsa is what I have played for many years, and this is mambo, guaracha, cha cha chá and guagancó".

You may also be interested: The 4 differences between salsa en línea and salsa cubana

PD.1: If you liked it or want to add more information to the article we will be happy to read your contribution in the post comments.